Stroke survivor and long-time friend and supporter of the Rangers Charity Foundation, David Smith, is running his own ‘550 challenge’ from Ibrox to Anfield and back as a tribute to the Rangers team and manager after winning their 55th title. 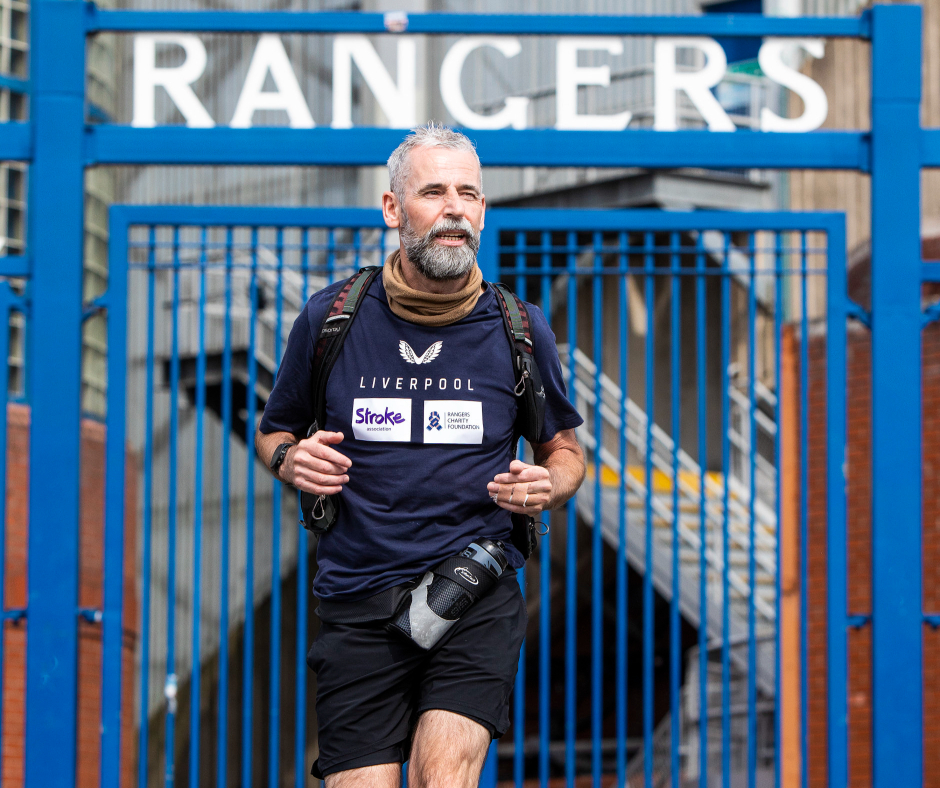 David (55), from Kirkintilloch, left Glasgow on 2 June for the challenge of a lifetime by running 22 marathons in 22 days (over 550 miles) after suffering a stroke in December last year.  The stroke affected David’s ability to talk and to communicate. Despite this, he is raising money for the Rangers Charity Foundation and the Stroke Association and is due to arrive back at Ibrox tomorrow.

David said: “I had an Ischemic stroke on December 8 and after 24 hours of touch and go I survived – I knew I was going to be okay, but I couldn't actually speak to tell the people around me.

"Three days later, I was up and walking about, running up and down the stairs. I was told I was supposed to be in for a month, but I was able to leave after 15 days.

David has been left with some residual effects from the stroke, most notably his communication difficulty – referred to as aphasia. He feels his running challenge is helping in his recovery, including his aphasia:

“I believe my fitness pulled me through, I knew I had to have a plan to beat this stroke. I wanted to run it off.

"I've been lucky, but not everyone is the same so I'm doing this run in support of the Stroke Association, who do wonderful work for those less fortunate than myself.

"I'm also running for my usual charity, the Rangers Charity Foundation, who do a lot of work in the local community and help a number of different charities, including UNICEF.

"Going to Liverpool and back is in tribute to Steven Gerrard who delivered the 55th league title and got me through my darkest days.”

“David has been a supporter of the Foundation for many years, but this is the most extreme challenge he has taken on. We have been cheering David on every step of the way and are extremely grateful for the support which will allow us to continue our community and charity work. His positivity and resilience truly is inspirational.”

“This is an enormous challenge for David to undertake so soon after his stroke.

"It is through sheer grit and determination that he has come this far.  And we know that alongside specialist support, resolve like David’s is vital to rebuild lives after stroke."

"We are so very grateful to David and we can’t thank him enough for his support. ”