Rangers FC and the Rangers Charity Foundation were officially presented with the Employer Recognition Scheme Gold Award from the Ministry of Defence last week during a special ceremony at the National Army Museum in London.

Rangers announced in August that it had become the first British football club and club charity to be given the ERS Gold Award, and representatives subsequently collected the accolade from the Chief of Defence Staff General Sir Nicholas Patrick Carter KCB CBE DSO ADC Gen. 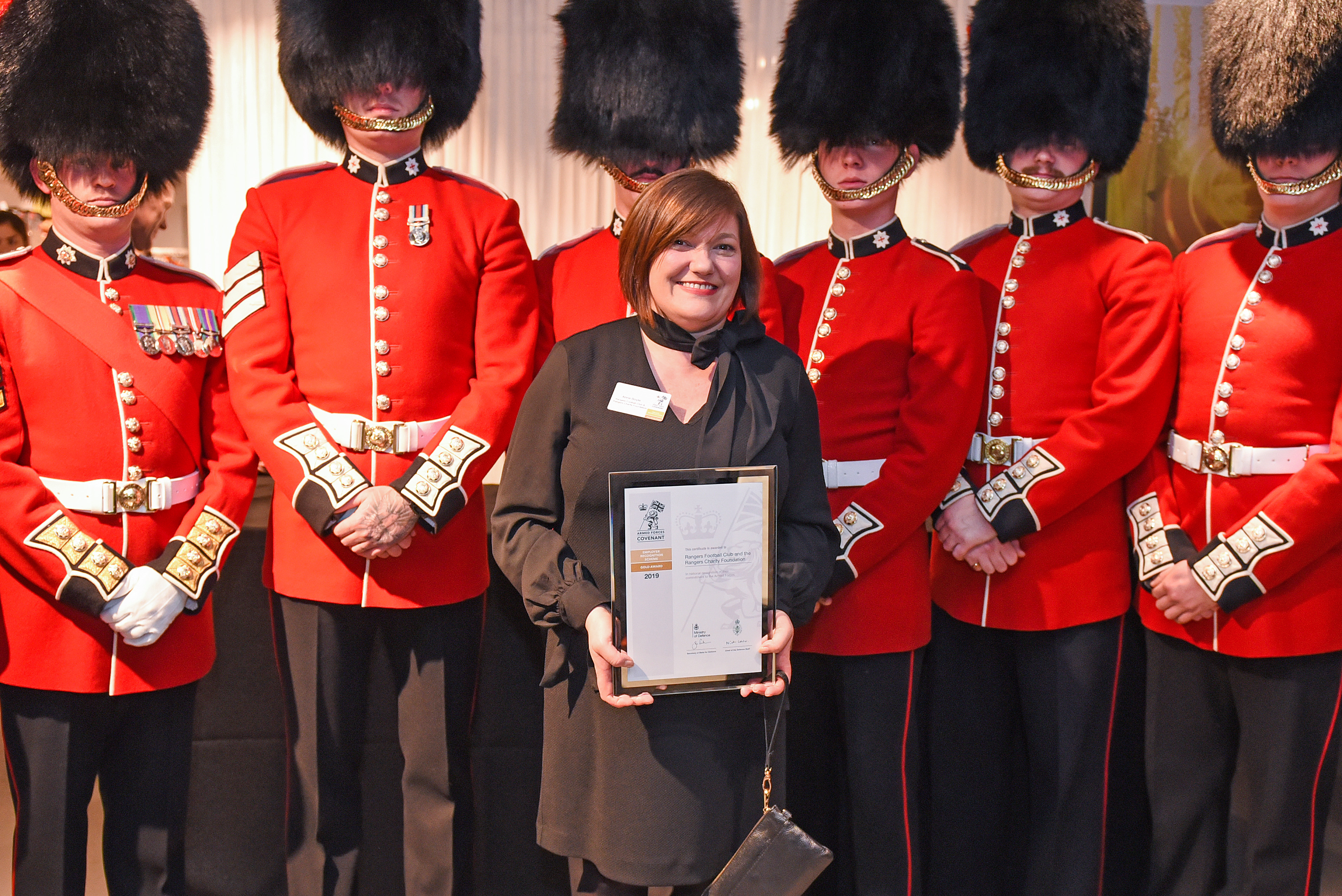 Rangers Football Club and Rangers Charity Foundation signed the Armed Forces Covenant in October 2016 – a commitment to supporting the forces through services, policy and projects – and are now being recognised for their “immense” work with the Armed Forces.

Rangers proudly deliver a range of initiatives, from regularly welcoming serving regulars and reservists to Ibrox as part of the Tickets for Troops initiative, to supporting a number of service related charities and providing community programmes for veterans via the Rangers Charity Foundation.

Stewart Robertson said: “Achieving the Gold Award is a wonderful recognition for both the Club and Foundation and I would like to pay tribute to everyone within Rangers, as well as our supporters, who have contributed to this important work over many years. 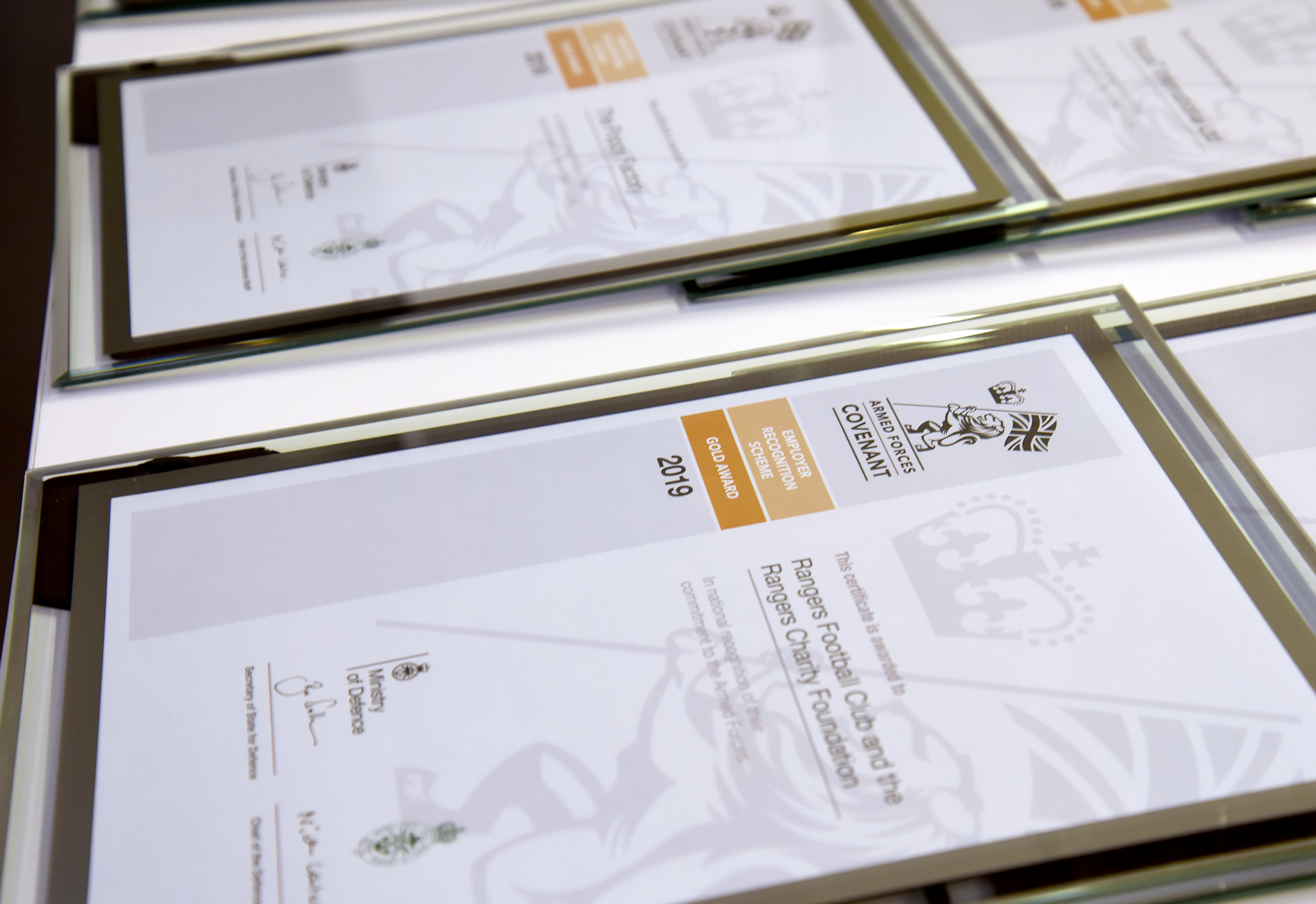 “We are committed to doing whatever we can to support those who serve and promote an armed forces-friendly environment. I know that this special accolade will inspire us to advocate on behalf of the MOD’s Employers’ Recognition Scheme further.

“Congratulations to all the organisations receiving an award in 2019.”

Armed Forces Day and activities around Remembrance Day are also part of the Armed Forces Covenant pledge. Rangers celebrated Armed Forces Day at Ibrox once again in September, with representatives from each of the services in attendance as guests of the Club and Foundation.

The Club and Charity Foundation also brought together more than 70 employers to a special breakfast event, to celebrate the second anniversary of signing the Armed Forces Covenant last year which outlined the business benefits of committing their support for defence. 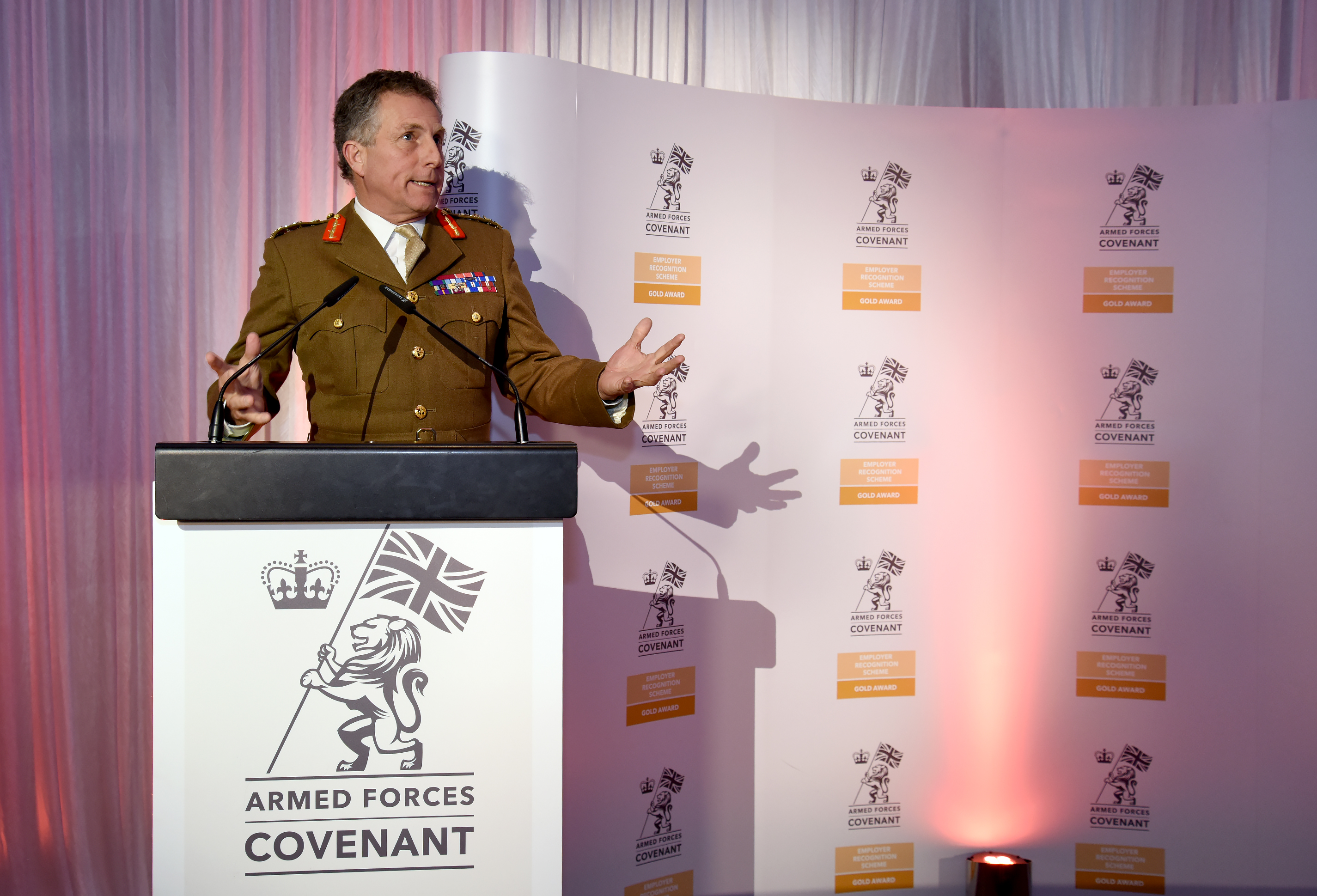 Connal said: “Receiving this special award is terrific news for everyone at the Club and Foundation, and is particularly special in the UK context.

“As well as embedding forces-friendly policies, there are so many ways in which we have been proud to make a difference over the years, including: holding unique Armed Forces Day events at Ibrox; supporting veterans via our Glasgow Veterans United programme; holding an Armed Forces Covenant showcase breakfast event with Lowland RFCA and raising over £180,000 for forces related charities.

“Supporting those who serve is just one of many important strands of our work at the Rangers Charity Foundation. We’re proud to play our part in making a difference, and with this award we have a renewed sense of purpose to advocate on behalf of the Defence Employer Recognition Scheme.”

Rangers Football Club Manager, Steven Gerrard, added: “This is proud moment for everyone at the Club and Foundation, who I know work hard to support serving Armed Forces personnel and veterans each season. 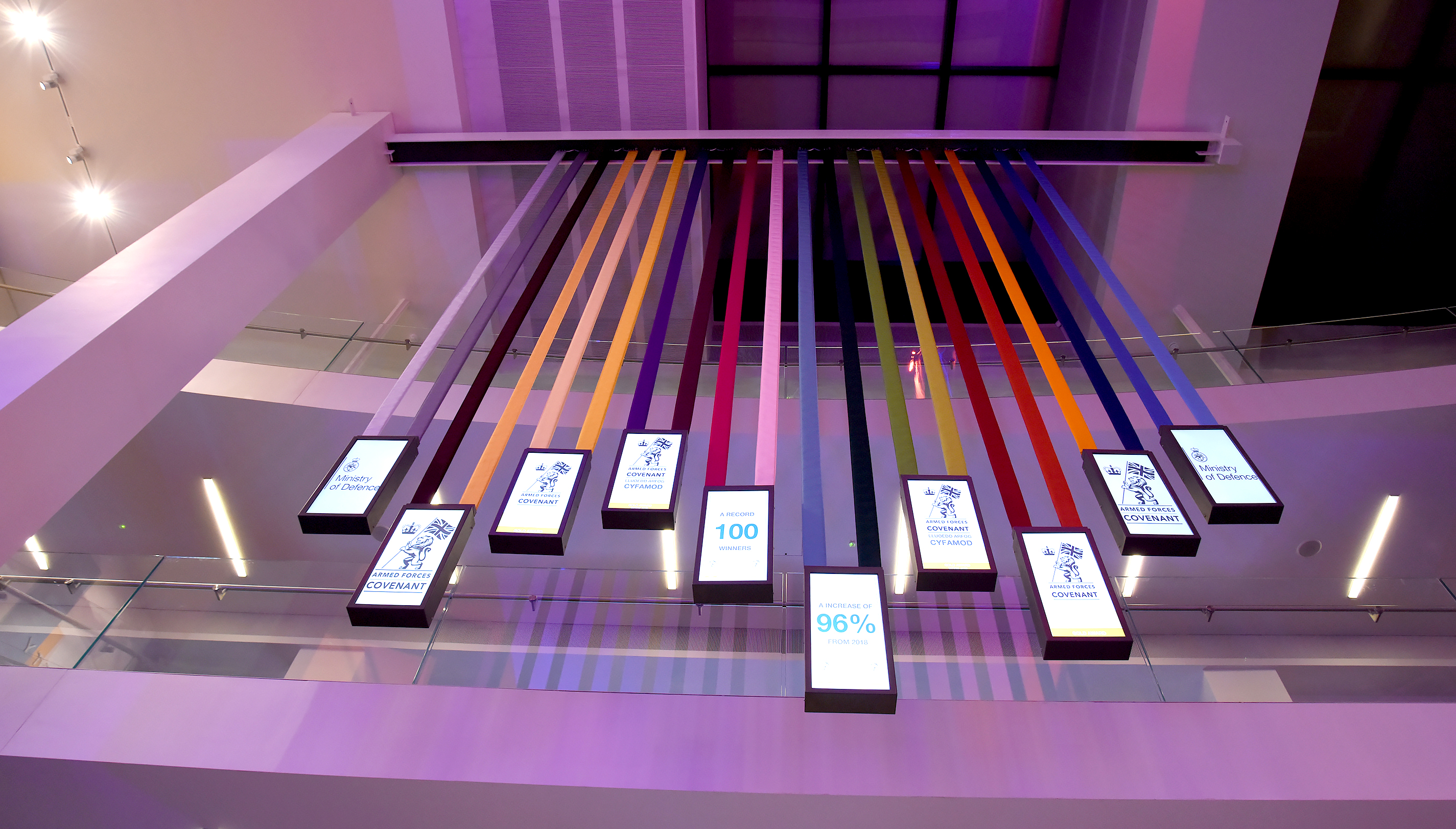 “I hope that the fans will join us all in celebrating this special award – it’s well deserved!”

Colin Vooght, Head of Engagement at Lowland Reserve Forces’ and Cadets’ Association (RFCA), the organisation which manages relationships between employers and defence in Scotland, said: “This is the first time a football club and club charity has attained a Gold Award and we congratulate Rangers in this fantastic achievement. 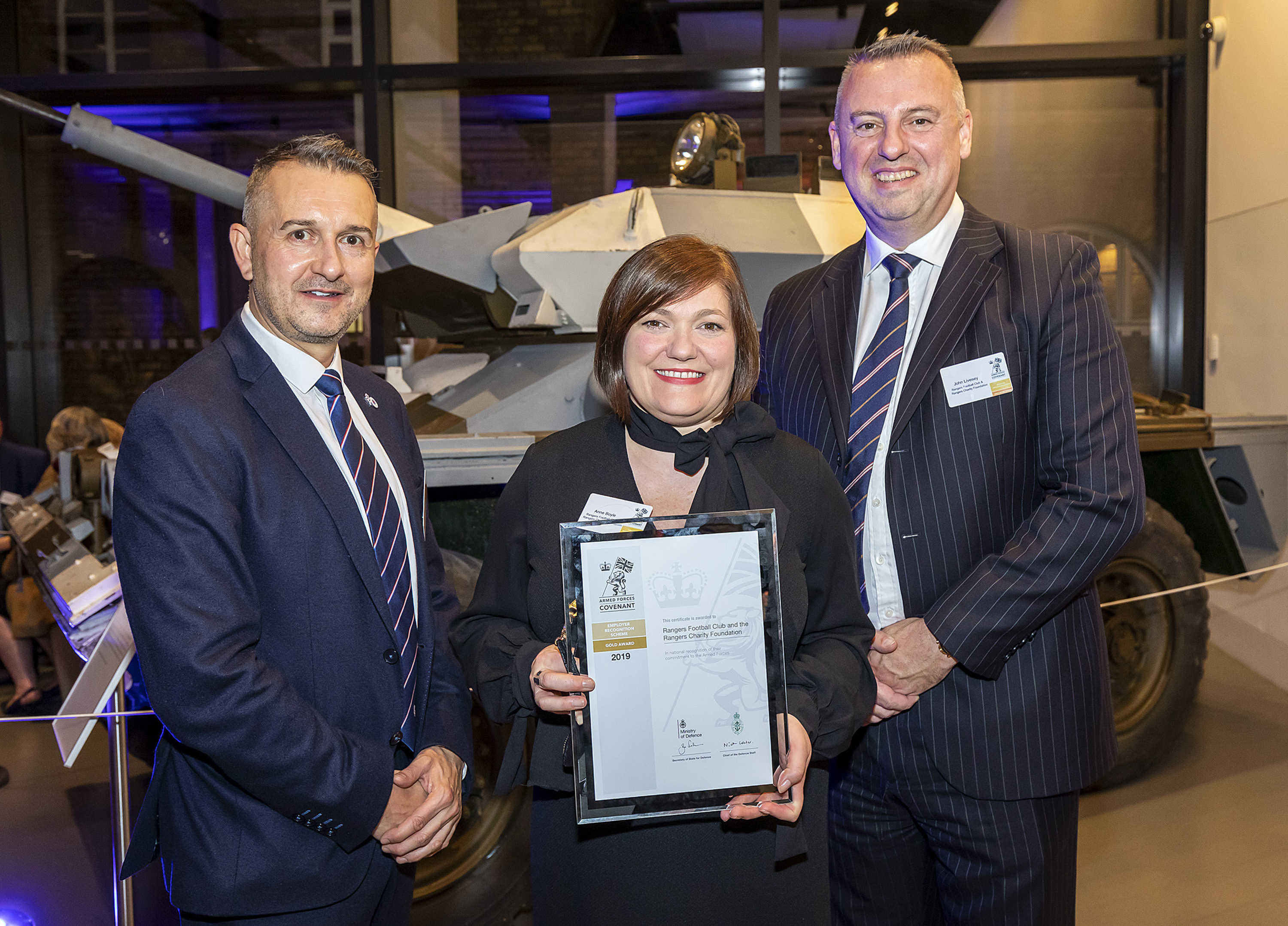 “We have worked closely with Rangers over the last few years and have been impressed by the way they have translated their commitment into activity, with a range of initiatives to support service men and women.

“I would also like to congratulate the wide variety of different organisations who received a Gold Award this year. This proves companies and institutions of all sizes and sectors can play their part in supporting the armed forces community in Scotland.

“I am delighted that these employers have been recognised with the Ministry of Defence’s highest award and look forward to continuing to work alongside each of the award winners in the future.”